If you love clear forms, down-to-earth furnishings and intentionally imperfect aesthetics, the new industrial style is just right for you. The living trend inspires with authentic found objects and looks so wonderfully calm that everyone feels at home right away.

Read here how the trend works exactly and which pieces of furniture with a factory feel shouldn’t be missing.

Industrial style: this is what the new living trend looks like

The furnishing style combines two opposing directions: worn functionality meets nostalgic cosiness. While the pieces of furniture used can bring a previous life with them and look as if they come from a run-down factory building, rustic and harmonious elements are added. The result is a look that has rough edges and lives from the imperfect.

Excursus: who invented the style?

In the 1970s, the first photos from New York appeared that documented the trend – but initially rather unintentionally. At that time, the young art scene around Andy Warhol hijacked vacant commercial space in the still unadorned Manhattan. People worked, lived and celebrated in the desolate lofts and created the new living trend rather by chance.

The background is that the ambitious artists used industrial elements left behind, which they found in the orphaned halls. These were quickly converted into functional furniture. The result were exciting creations that completely reinterpreted living.
For example, an opulent dining table could be made out of an old workbench or rough wooden pallets were converted into beds. The bare concrete floor, the exposed brick masonry and unplastered metal pipes served as a visual framework.

When the first interior shots of the newly interpreted studios went around the world, you could hardly believe your eyes. To live so unconventionally and individually was considered revolutionary. Andy Warhol was not only celebrated as an icon of art, but also for his feeling for the reality of life.

Today, a few decades later, the look has become a bit more modern. However, he has not lost anything of his morbid charm and hip nonchalance.

What elements are important in the interior design trend?

Two components should not be missing in the industrial style: Hearty wood and cool metal! These two contrasting materials give the style the grounding that sets the tone and can be found in almost all pieces of furniture.

How the two materials are combined is a matter of taste. The elements made of wood and metal are usually arranged with other “real” materials such as concrete, glass and sturdy leather. If you can see open plug connections, weld seams, offset pieces or screw heads, that’s all the better.

It’s not difficult at all to let the relaxed industrial charm move into your home. The focus is clearly on an angular design language. If apparently used pieces of furniture with a “used character” are added, the basis is already in place.

How do I bring the trend into the bedroom?

Industrial-style rooms naturally bring a certain warmth and originality with them. They convey exactly the right atmosphere with which one likes to surround oneself in one’s bedroom.

The look is easy to recreate. With a rustic solid wood bed on metal runners or castors, for example, you can bring the furnishing style into your home in no time at all. A restrained wardrobe made of solid wood is also nice, as it can develop a patina over time. Narrow chests of drawers, an old oil drum as a laundry drum or a bed bench that is not in front of, but next to the bed, set accents. If a cowhide peeps out from under the bed, the look is perfect.

If you want to redesign your bedroom, you don’t have to replace all of the furniture. Often it is enough if only the bed or a chest of drawers is replaced. Instead of a bedside table, for example, you could build a rusty stool. If a trendy textured wallpaper with a concrete or stone look comes up on the wall, the style works.

What should I pay particular attention to?

It is important that the bedroom is not cluttered with too many pieces of furniture. There should always be visual axes that show a clear structure. In small rooms, selective lamps can support the effect.

When it comes to industrial style, it pays to combine old and new elements. It looks successful, for example, when a new bed is completed with found objects from the flea market. Whether it’s a wobbly wine crate (as a bedside table), an old slate or a decrepit Chesterfield armchair – the main thing is that the elements have a certain used look.

You will find it here

Very few people have the leisure to design their new table, massive bed or heavy wardrobe from old found objects themselves. It doesn’t have to be. Many manufacturers have specialized in the trend and offer great collections in which brand-new furniture is trimmed to look old. In the online shop we also offer a wide range of furnishing concepts in a chic loft design.

In order to spice up the living style, all you have to do is find the right accessories. These can be found cheaply at flea markets, commercial sales or household liquidations. You don’t even need manual skills to use the found objects. Things are allowed to show that they had a past life. Rust, blobs of paint or varnish give the furnishings that certain something.

What should I absolutely avoid?

Anything “fake” is frowned upon in this style. You should concentrate on a few, authentic pieces of furniture, which are preferably made from unprocessed materials. Elements with veneer surfaces or furniture with details made of plastic, plexiglass or synthetic leather are not so suitable. Curved or round lines are also used sparingly in the industrial style.

That doesn’t fit so well:
unfortunately, flowers, private vacation photos, fairy lights, floral pillowcases or scented candles don’t work at all. If you are in the mood for vintage and don’t want to ban personal favorite items from your living environment, you should orientate yourself more towards shappy chic.

Which colors are okay?

You should also exercise restraint with the color tones. The predominant accents used are brown and beige – in any nuance. Highlighting is set with black and gray. Thanks to this dark and matt color scheme, the rooms in the industrial style per se have a harmonious depth and warmth.

To ensure that the look is not too heavy, carefully selected accessories are added – in a strong color. A lamp in fire alarm red or a side table in rich yellow could serve as the crowning glory. Less is clearly more.

Does the style also work in small spaces?

Those who live in a loft have a clear advantage – but nobody has to move as a result. The style works great in normal-sized rooms with a standard ceiling height. Then you should put a little more emphasis on a clever lighting concept and choose the furniture cleverly.

If you don’t have that much space available, you should only set up one opulent piece of furniture per room – but this can then be displayed conspicuously in the middle of the room. When it comes to other furniture, it is better to use modesty and arrange it discreetly along the wall.

What about other decorative elements?

Please do not overdo it with decorative elements. Because furniture with an industrial look already has a lot of character and often has quirks or patina that are brought into focus, the surrounding area is rather narrow.
It is often enough to hang a metal sign with a vintage look, a weathered mirror or an old bicycle frame on the wall. Historical industrial lights that dangle dramatically from the ceiling or floor-to-ceiling typographies that lean against the wall are also beautiful .

A worn Persian carpet that is placed over the bare floorboard or a metal basket that has been converted into a floor lamp also go perfectly. Small decorative objects are not that good. 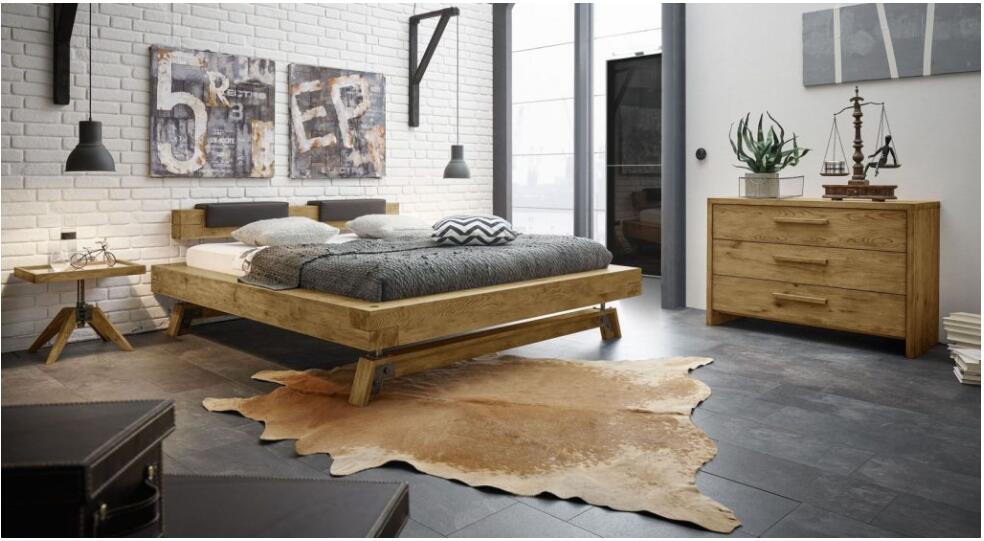